Worth a good look! 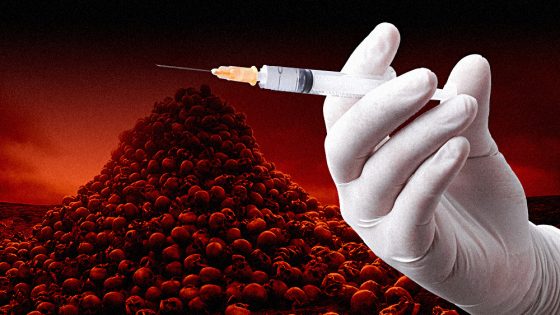 In an interview with Lior Gantz ofthe Wealth Research Group,Robert F. Kennedy Jr. discussed the major problems facing the United States today when it comes to health. This is a MUST WATCH interview before you line up for the COVID-19 vaccine or any other vaccine for that matter!

This is an interview you’ll want to watch, as Kennedy talks about vaccine safety and efficacy, as well as how Big Pharma has taken over the government to dictate health policy. Their only concern was that YouTube would censor it or ban them altogether, so an exclusive portion of it, deemed too controversial for YouTube, since it involves the elite cabal,can only be accessed HERE!

Now that Big Pharma is in control, “pharmaceutical drugs are now the third leading cause of death in the United States after heart disease and cancer”, says Kennedy. That’s huge, but it’s…

Published by Oh for crying out loud & it's Echoes!

About me it asks? Yikes...... Well I am a passionate and spirited mature woman of faith. Faith in God, My Lord and Saviour must always come first. Also I am a mom, of four. I was a wife 3 times, 2 times widowed. That was rough ! Rougher in every way more than I ever thought it would be.! I had no understanding of what the loss of a spouse entails. I was caretaker to each of them until they passed from their medical catastrophies. So after the last one passed I decided enough, I was done, could not experience that kind of loss again. Besides I began to think it was safer for the males in my life if we never get married. God has a purpose for this single aloneness He has me in today. So I will wait as He slowly reveals His plan for me to come. That is just fine with me. I just know those plans are going to be interesting at the very least. I am also a braggadocious Grandmom, Stepmom, Aunt, Sister, Cousin, and Friend of many. A woman who has much to say about a great deal. An Opinionated INTJ personality. Don't know about INTJ's? Thats your problem, google it. There are'nt many of us which I heard is a good thing. Ha it's all about perception. We are frustrating to be around because we are right. About almost anything and unrelenting. Just ask us. So by popular demand, (a few friends and family suggested that I write down some my experiences, notions, opinions. Certainly not so I wouldn't drive them all crazy with my ever competing thought and comments) 'Oh For crying out loud' was born. Born once in 2015 and then, Born again. More Recently. Now it is 'Oh For Crying Out Loud & it's Echoes'. I know it's a long name but I have trouble with being short. A work in progress. As the Good Lord has seen to bless my life with many diverse and rare maladies along with a humongous family, really large in size and in its fulnessl of unique and rare nutty complex diagnosis'. It seems fitting to share the mountainous climb many of us shared through our trips and travails of medical errors and not. We need advocates in our health system, loads of them. From every genre and field. People are dieing in vast numbers . The cover ups are humongous, unbelievably tragic. And common. Blame the Insurance companies? They certainly are a great part of the problem, but then so are their lawyers! Necessary, in many many ways yes! But there are good eggs in every basket, which means usually the opposite is also true. Just like we need them, we need pain. Well we do! How otherwise would we know fires are hot or learn the dangers to stay away from? However the medical profession in all it's glory is the most eggregious! All their services and administrators should carry ever more of the burden of responsibility along with all their ever greedy lobbyists and our corrupt nonsensical governing bodies! They take the cake!! Pharmaceutical companies, medical equipment companies cavorting along in orgy style with The FDA, hahaha ,yes we need them but not the harm they also cause. Well enough about all the icky difficult news.....for now. Blessings and hugs to you and I pray your helped by these stories and thoughts . Which more are to follow soon. If even you gain just a little better understanding of the goings on behind the scenes in our medical care for you and your loved ones protection, I will rejoice and a good Truth will be shared.. Until later......SS . View more posts

This site uses Akismet to reduce spam. Learn how your comment data is processed.